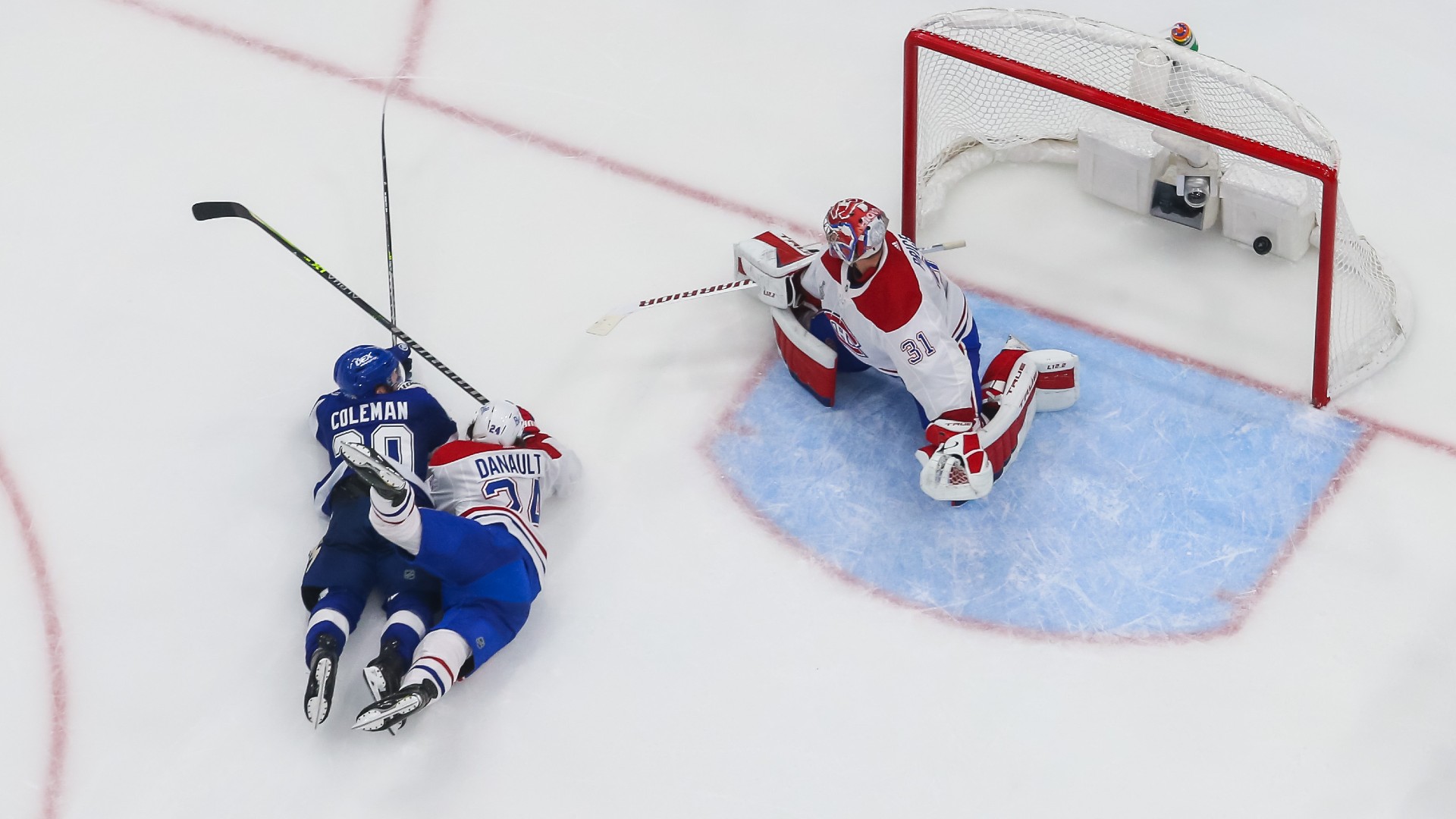 Lightning forward Blake Coleman scored the goal of the 2021 NHL playoffs Wednesday night in Game 2 of the Stanley Cup Final.

A fully extended Coleman swatted a feed from Barclay Goodrow past Montreal goaltender Carey Price with three-tenths of a second remaining in the second period. The tally gave Tampa Bay a 2-1 lead after it was outplayed by Montreal for most of the game.

Coleman started the play by forcing Phillip Danault into a turnover in the neutral zone. Defenseman Ryan McDonagh collected the puck and passed to Goodrow, who avoided a poke check attempt by Ben Chiarot to gain the offensive zone. Goodrow then passed across the Royal Road to Coleman, who outreached a backchecking Danault — while parallel to the ice — to punch in the puck.
WHAT. A. GOAL. WOW.pic.twitter.com/YoZy6N7qoF
— Sporting News Canada (@sportingnewsca) July 1, 2021

The goal, Coleman’s second of the playoffs, turned out to be the game-winner as Tampa Bay went on to a 3-1 victory. The Lightning lead the best-of-seven two games to none as the series moves to Montreal for Game 3 on Friday.MORE: Game 2 live updates, highlights“I know the clock was winding down and I saw Goody make that heads-up play in the neutral zone and give it a little poke past the D. So I tried to do whatever I could to give him an option and an incredible area pass from him and fortunately we beat the clock,” Coleman said postgame.McDonagh said the goal was an example of how Coleman and Goodrow are always heads up.”Those guys do a great job staying structured and disrupting in the neutral zone and allowed us to turn it over and tried to get it up in their hands right away,” McDonagh said. “Didn’t know if there was enough time on the clock. I was looking up and not really watching the play. I mean, didn’t really even see it go in, I was just kind of watching the clock and thankfully there was, whatever, half a second left.”That line continues to night in, night out bring it in different fashions: close guys out, play well defensively and score some huge timely goals.”Lightning coach Jon Cooper knew how high-quality the goal was.”It’s one of those where the announcer says: ‘You’ll see that on “SportsCenter” tonight.’ That’s what that was,” he said.Cooper and the rest of the hockey world also know that Coleman has a knack for scoring “SportsCenter” goals. Last year in the bubble, he went airborne to score against the Bruins.
Wow, what a goal from Bogosian and Coleman to tie the game 1-1 #GoBolts pic.twitter.com/2TuOjjN2eA
— Shayna (@hayyyshayyy) August 25, 2020

“You know what I thought of? The Boston game in the bubble last year,” Cooper said. “Literally, in my head I was like, ‘Did he just do that again?’ Different scenarios but it was remarkably similar. Just the timing was epic. Definitely gave us a big lift going into the (third).”Coleman tried not to get too excited about scoring a goal that will is sure to go down in Stanley Cup Final lore. “I don’t know, it happens in the Stanley Cup Final, it’s pretty memorable for you, this one is definitely up there, with the circumstances in the game, this one will stick in my mind,” he said. “There are always special ones in your career but it’s just one goal, we still have a lot of work to do, put this game behind us.”Jackie Spiegel contributed to this report.