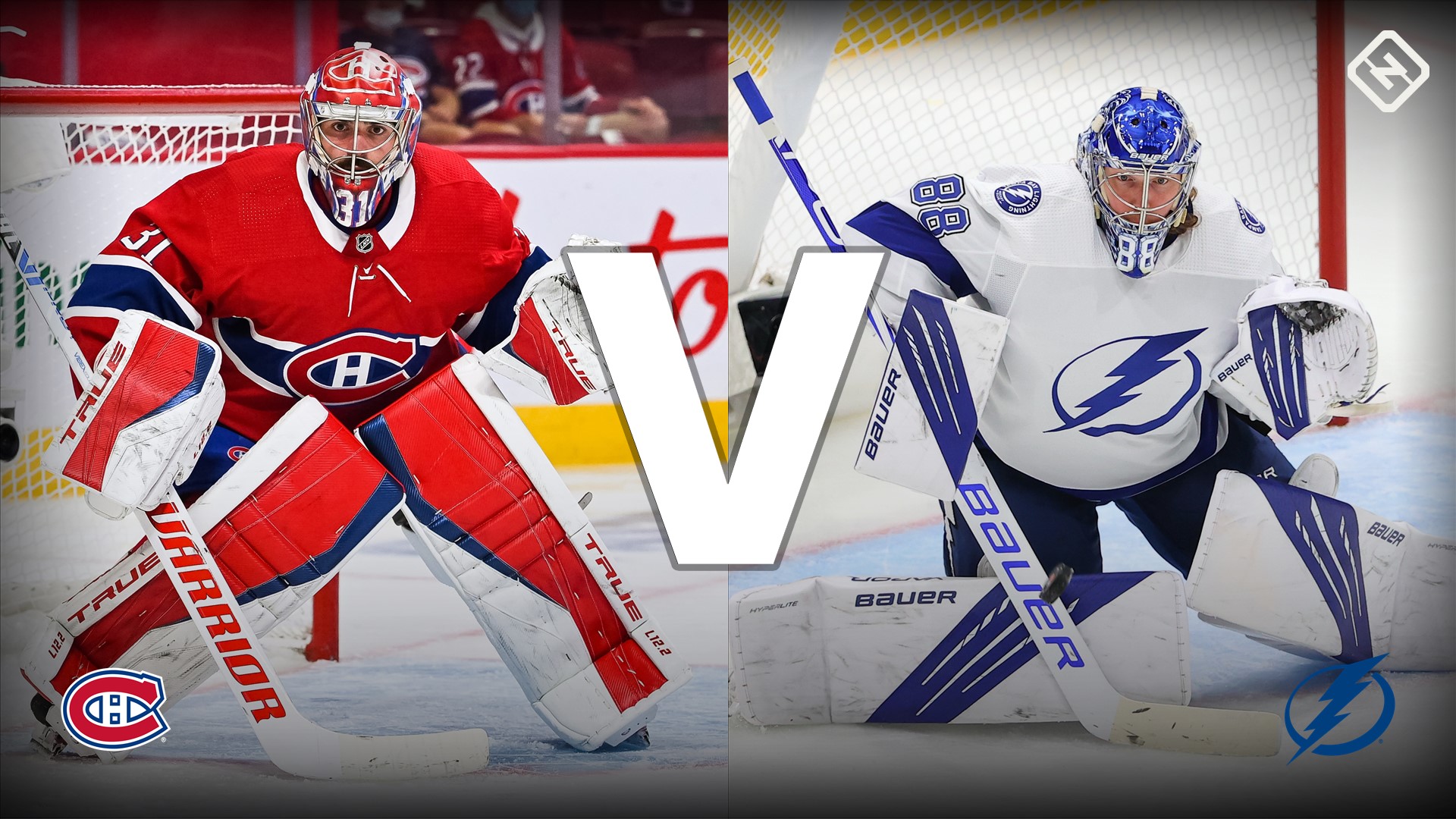 Is Wednesday night’s game a must-win for the Canadiens?

Some would say no, but considering how dominant the Lightning were in Game 1 (a lopsided 5-1 win on the scoresheet and the ice), the Canadiens cannot afford to head back to Montreal down 2-0 in the Stanley Cup Final.

“Same thing we’ve said all along, don’t really care,” forward Brendan Gallagher said when asked about his team being counted out. “We know what we are as a hockey team and we believe in each other. We believe when we play the way we need to play, we play our game, we dictate the style of hockey it is, we can compete with anyone. I think we’ve shown that here through three rounds. Game 1, we got away from that . . . made the game a little bit too easy [for] them.”Tonight is just getting back to our game and making sure that we’re controlling the style of the game that we’re playing here.”Gallagher, by the way, showed off his battered face, the result of him falling face first while tussling with Mikhail Sergachev in Game 1. He was checked for a concussion and is OK for the game. Montreal will once again be without head coach Dominique Ducharme, however, because of COVID-19 protocols.While Ducharme continues to be missed behind the Canadiens’ bench, the Lightning will be without a key player on their bench in Alex Killorn. The winger blocked a Jeff Petry shot in the second period of Game 1 and, after skating one shift in the third, did not play the rest of the game. He’s tied for second on the team with eight goals in the playoffs, so his injury creates a big hole in the lineup.”Killer is a big part of our team,” said forward Tyler Johnson. “He eats up a lot of minutes and plays in every situation. It’s going to be everyone having to step up in different roles. That’s the great thing about our team, we have that depth. It’s going to take everybody.”Sporting News has all the action as the Lightning and Canadiens battle in the Stanley Cup Final (all times Eastern).

9:55 p.m. — Johnson is back, by the way, and almost scored on a loose puck after the power play had ended.9:54 p.m. — Good chance by Point from the slot.9:53 p.m. — Joel Armia cross-checks Blake Coleman to the face and gets two. Lightning are 0-for-2 on the power play so far.9:51 p.m. — With under four minutes to go:Nick Suzuki has eight shots on goal and a goal. The Lightning have eight shots on goal and a goal.9:50 p.m. — John Travolta is at the game.
John Travolta in the house pic.twitter.com/KdzeU7mRms
— Joe Smith (@JoeSmithTB) July 1, 2021

9:39 pm. — Lehkonen goes to the locker room after that hard hit. Tyler Johnson — who got the primary on Cirelli’s goal — heads to the locker room after blocking that shot.9:37 p.m. — Sergachev takes down Lehkonen hard, nowhere near the puck and Canadiens head to the power play.
Dangerous play from #GoBolts Mikhail Sergachev here on #GoHabsGo Artturi Lehkonen
🎥 @NHLonNBCSports pic.twitter.com/d6dHDFDHzz
— Here’s Your Replay ⬇️ (@TheReplayGuy) July 1, 2021

9:33 p.m. — Tyler Johnson with a big block on Jesperi Kotkaniemi and he comes up limping. Reminder: he took Killorn’s spot on the second line. Johnson is shown on the bench a little uncomfortable.9:27 p.m. — GOAL. Anthony Cirelli covers the point, throws the puck on net and it gets past Carey Price. It’s the Lightning’s eighth shot on goal in the game. Tampa Bay leads 1-0.
The Lightning strike first in Game 2! ⚡️#ItsOn | #StanleyCup pic.twitter.com/7V13kCj3mX
— Sportsnet (@Sportsnet) July 1, 2021

9:24 p.m. — Lightning get their first shot on net in the last 13 minutes.9:16 p.m. — Second period starts with Montreal on the power play and the team going with four forwards.

9:01 p.m. — Some fun stats:Canadiens outshot the Lightning 13-6.Per Natural Stat Trick, Lightning led in shot attempts (20-15) and Corsi For percentage (57.14 to 42.86).8:59 p.m. — Period ends. Canadiens will start the second with 92 seconds remaining on the 5-on-4.8:58 p.m. — Not a whole lot doing with the man advantage for the Canadiens. 8:54 p.m. — On the follow-through, Ryan McDonagh clips Phillip Danault in the nose (adamantly shows to the referees he’s bleeding) and the Canadiens get a four-minute power play. A chunk of it will be 4-on-3.8:52 p.m. — A little 4-on-4 action as Paul Byron and Erik Cernak exchange pleasantries behind the play.8:46 p.m. — Tyler Toffoli with a good shot of the rush down the right wing that Vasilevskiy takes high off the shoulder.8:36 p.m. — Stamkos steals the puck but can’t get shot off as Paul Byron slashes him. Byron to the box.8:31 p.m. — After they killed off the power play, Tyler Toffoli and Cole Caufield get some looks.8:2.8 pm. — Brayden Point tripped up by Jeff Petry and the potent Lightning power play goes to work.8:27 p.m. — Canadiens laying the body on the line in this one as both Brendan Gallagher and Jesperi Kotkaniemi make some big-time blocks.
Look at this block from Gally #GoHabsGo
🎥 @NHLonNBCSports pic.twitter.com/YhMDnUVYAt
— Here’s Your Replay ⬇️ (@TheReplayGuy) July 1, 2021

8:24 p.m. — Nick Suzuki flying in, tries to make a move but Vasilevskiy sticks with him for the stop.
Suzuki chance.
Vasy with the pokecheck
🎥 @NHLonNBCSports pic.twitter.com/l31YolppqZ
— Here’s Your Replay ⬇️ (@TheReplayGuy) July 1, 2021

8:03 p.m. — Mathieu Joseph takes Alex Killorn’s roster spot and is skating on the fourth line with Pat Maroon and Ross Colton. Joel Armia is back in the lineup for Montreal.
Some thought Habs should change lines.

8 p.m. — Lightning have some fans in the building.
Looks like #Bucs left tackle Donovan Smith is here at Game 2, and safety Mike Edwards is here as well donning the bolt on his chest.#Gobolts #gobucs #tampabay @DSmith_76 @M__Edwards7 pic.twitter.com/TaK081l5sl
— Eduardo A. Encina (@EddieInTheYard) June 30, 2021

7:51 p.m. — Tennis star Félix Auger-Aliassime, a native of Montreal, spoke about his hometown team.
I spoke with Montreal born tennis star Felix Auger Aliassime today after his opening round win at Wimbledon and couldn’t resist asking him if he was finding inspiration from the @CanadiensMTL run to the #StanleyCup Finals. The 20 year old was happy to share. #GoHabsGo pic.twitter.com/sqMzdl0pyV
— Mike McIntyre (@McIntyreTennis) June 30, 2021