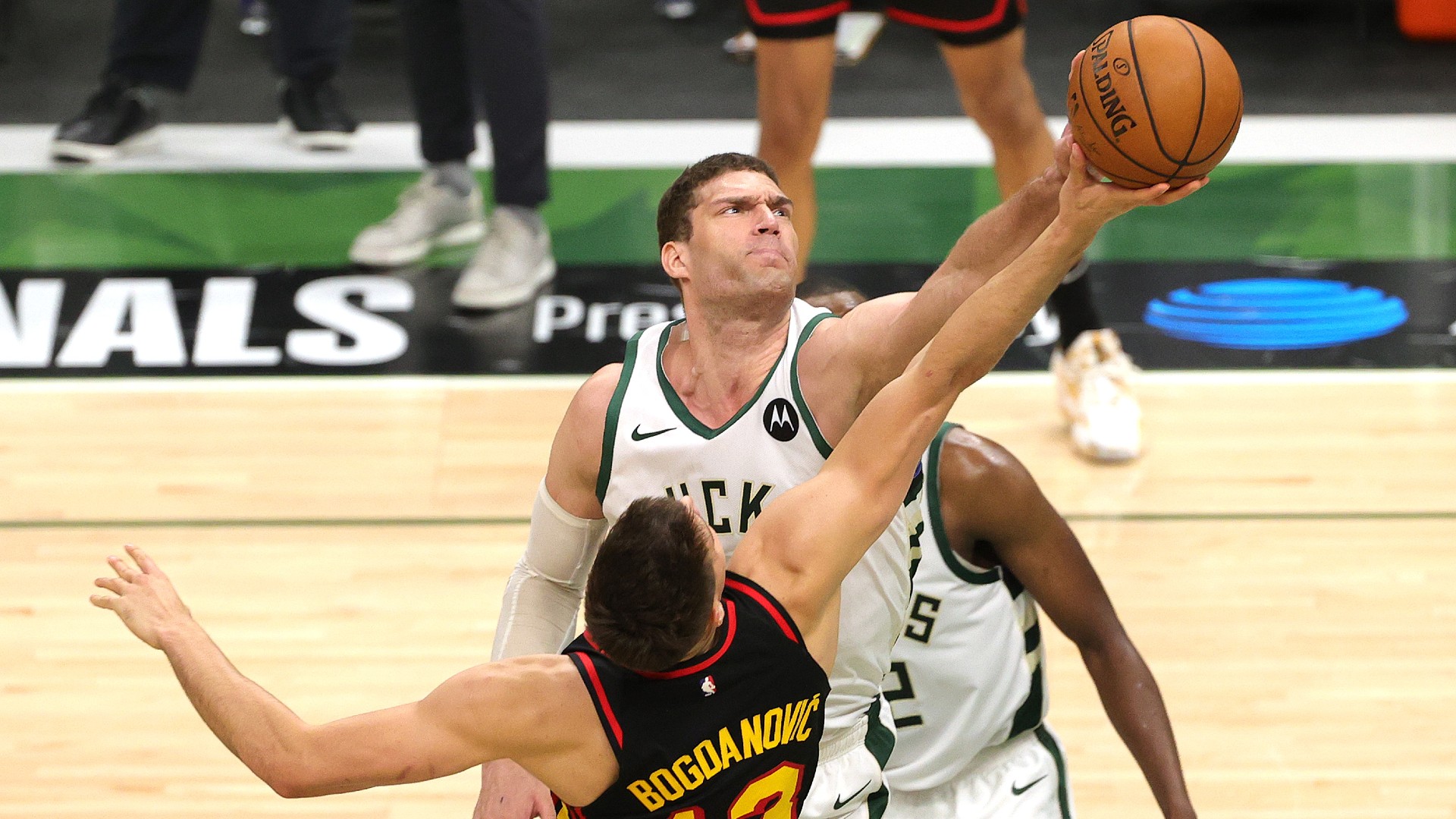 On the first possession of Thursday night’s Game 5 between the Bucks and Hawks, Brook Lopez found himself isolated against Kevin Huerter. Despite the speed disadvantage, Lopez stuck with Huerter as he drove to the basket and rejected his running floater. Jrue Holiday got the ball in transition, backed Bogdan Bogdanovic all the way underneath the rim and finished over him with a lefty layup.

That sequence encapsulated the entire contest. The Bucks bullied the Hawks on the interior throughout Game 5 in cruising to a 123-112 win and 3-2 series lead in the Eastern Conference finals.”It was one of the main priorities, just to be aggressive out of the gate,” Holiday said during his postgame media availability. “Be the aggressor, be more aggressive than they were. And we definitely felt like, those games in Atlanta, the energy from the crowd or whatever it was, they swung and punched us in the mouth.”We didn’t want to take any chances. We wanted to come out strong and hit first.”Milwaukee punched first this time around, and Atlanta never recovered. The numbers tell the story:

The Bucks lived in the paint in Game 5, as four different Milwaukee players scored at least 10 paint points. Lopez led the way with 26 of his playoff career-high 33 points coming in the paint. With Giannis Antetokounmpo sidelined, Lopez became the primary roller and cutter to the rim, and Holiday (13 assists) and Khris Middleton (eight assists) consistently found him for easy buckets.
Brook Lopez had a HUGE Game 5. 💪

“I think there was great opportunity for him to just get the ball a little bit more, try and use him a little bit more, and he came through big time,” Bucks coach Mike Budenholzer said. “There were a couple where he just made plays, but he did it in a lot of different ways. He did it in pick-and-roll. He did it on the offensive glass, got to the free throw line. Just an overall really, really impressive effort.”

“I think Jrue did a great job of setting the tone first,” Middleton said. “He got himself going, then got other guys involved, Brook, Bobby [Portis]. But then myself, I just try to pick my spots, find where I can attack and be aggressive and take advantage.”

The final gap in the rebounding department wasn’t huge, but Milwaukee showed it was going to be the more assertive team on the boards to open the game.Through the first seven minutes of the first quarter, the Hawks had . . . zero defensive rebounds. That’s right — not a single one. Cam Reddish finally grabbed the team’s first defensive rebound with 4:02 remaining in the opening period, and at that point Atlanta trailed by 18 points.Hawks coach Nate McMillan offered a blunt assessment of his squad’s effort level on the defensive end.
Nate McMillan: “They were more physical. They hit us in the mouth, and we just did not recover from that. They were aggressive… No defense on the ball, no defense off the ball.”
— Sarah K. Spencer (@sarah_k_spence) July 2, 2021

Now it’s on the Bucks to bring that same mentality and intensity to Game 6 if they want to lock up their first NBA Finals berth since 1974. They know anything less won’t be enough to knock out these feisty Hawks, especially with Antetokounmpo possibly still stuck on the bench “It’s absolutely just everyone stepping up together to fill that. Obviously no one can replace Giannis,” Lopez said. “He’s a freaking two-time MVP, so much of what we do. No one person is going to replace that. It’s a matter of everyone stepping up, and I think everyone showed that their capable of doing that tonight.”